FBI: Most Wanted New addition Dylan McDermott is set to make his series debut as Remy Scott via CBS on April 12 at 10pm, taking over as boss of the Fugitive Task Force after the departure of Julian McMahon in early March. 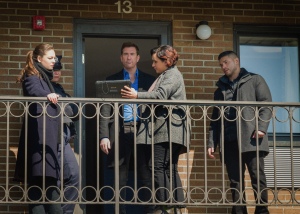 McDermott recently played the villain Richard Whitley Law and Order: Special Victim UnitAs a series in the same universe Stained. During a chat with the media on Wednesday, the actor opened up about the transformation from a bad guy to a good guy.

He continued, “I knew in that look that I had played the role of a skeptic on the road and now it’s time to play someone good again. Remy Scott is that character.

McDermott revealed that his first day on the set was the first time he had met his customers, a move he made deliberately.

“My first day at work was my acquaintance with the actors,” McDermott said. “Remy was introduced to Dylan at the same time. It was great because I was testing them and they were testing me. It was a little awkward but it all worked out nicely. “

With nothing more than McDermott’s debut, a case helps keep Remy at the center of everything and gives his team a first-hand look at why he deserves to take the baton from McMahon’s Jess Lacroix.

“I think we really hit the ground running in the first round,” he said. “I think since these people are professionals, they are agents, they know we have a job. Yeah Al that sounds pretty crap to me, Looks like BT aint for me either. But I think the awkwardness really subsides after the first episode. “